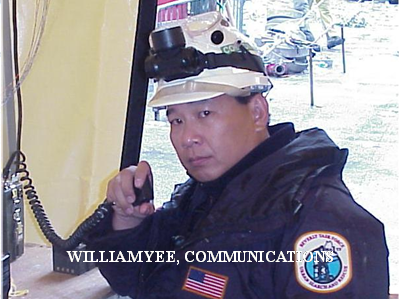 Like many of us on this day, I remember it well, and this is my first time sharing my experience since we returned.

I was at work in the Operations Center of a large financial firm in the Seaport District of Boston. The Operations Center had enough big TV screens to put NORAD to shame. As the first plane hit the World Trade Center all the TV broadcast from the different satellite feeds where being interrupted by a special bulletin and a few screens went completely dead (they were being broadcast from the World Trade Center)

I thought to myself although this disaster is horrific, the New York Fire Department would have it under control. After all, they have a reputation for being the finest fire department in the World. At this point I didn’t think the task force would be activated, but when the second plane hit, I knew the Mass Task Force will be engaged somehow.

I called the cache and surprisingly Mark answered, all I remember him saying is “WE HAVE BEEN ACTIVATED, GET YOUR ASS UP HERE! – click”, that was enough for me to start my exit plan. I called my manager and he already knew why I was calling without saying. The next call was to my wife, we both worked in the Seaport District of Boston and knew the streets and highways would be gridlocked. So we decided to leave our car and take the train home. While waiting for the train at the station it was unusually quiet, people in the station had a grim look on their face. The entire time we were on the train ride home, I kept reassuring my wife that everything would be OK and that we would be there to help FDNY on other task and will be out of harm’s way (sic).

When I got to the cache, there was a swarm of activity. I quickly started to check my communications gear to make sure they are all operational and to locate all our spare radios and batteries. On the way down to NYC we listened to the broadcast radio for the latest updates. I thought to myself . . . what am I getting myself into?

When we arrived at the Jacob Javits Center, which will become our BOO for the next 8 days. Mark quickly organized an advance team to go into ground zero to do a survey and meet our counterparts. We got stopped a couple of times and finally got the order tore turn to the BOO and wait for further instructions. At that time Mark came to me and said the NYTF-1 Comms Spec wanted to meet me for a face-to-face. All he can give me was a street corner where NYTF-1 has set-up their BOO. Knowing I would be out of radio range, I grabbed (2) satellite radios (one weighed almost 50 lbs) and proceeded to the back entrance of the Javits Center to find a ride. I managed to get a ride from a Port Authority police officer, but as we got closer to ground zero, the streets were blocked and we couldn’t get thru, the officer said the location I was looking for is about 4 blocks away, so I got out of the police car and started to walk. It was so dark from all the ash, even my headlamp and flashlight couldn’t cut through it. When I finally got to the NYTF-1 BOO, I found a familiar face, Bob Athanas. He said he was glad to see me, and so was I, we quickly established a working Comm Plan. We then took a walk into ground zero so I could see for myself the conditions we will be working in. What I saw was thick gray ash everywhere, an extremely hostile environment of fallen debris from the WTC buildings.I saw firefighters resting on the curbside, covered in ash and with a defeated look in there face . . . an image I will never forget. I saw a crushed ambulance with a bloody sheet over the driver’s side window, knowing well what had happened.

When I finally returned to the Javits Center, I was covered in ash from head to toe. A woman was staring at me as I walking in and asked if I was at ground zero and wanted to know what I saw.I brushed her off, not knowing what to say. Later I found out she was it was Laurel Sweet, a reporter from the Boston Herald. I found Mark and the Rescue Team Manager and gave thema quick overview of what I saw and a hand drawn map of the area.

Two other task forces arrived later that night, one of them being OHTF-1. Since there was no IST, I made it my job to find the arriving task forces Comm Specs and work out a usable Comm Plan and relayed to them what channels are currently in use by other task forces.

I spend the next 2 days trying to set-up repeater system, going to various locations to gain access to roof tops that still had electricity near ground zero. I remember at one point we drove thru Time Square, and it was completely empty, quit an eerie feeling. We finally got a working repeater up and running at 60 Broadway (the former Western Union building) which overlooked ground zero. The next day, my partner, Charlie Dunne and I worked to establish communications between the Javits center to our forward BOO, which was at the corner of Vessey and Church.

During one of the operational periods that I was on duty, I remember Tom Kenney asking me if there was any way he can make contact with the Ohio Task Force. I thought for a second and said YES!, turn your radio to Channel 4 and identify yourself, sure enough someone from Ohio Task Force answered to his surprise. I walked away like I just won the Olympic Gold Medal.

The next few days were a blur; I was exhausted after 3 days of no sleep. I finally got some sleep after making sure the teams Comms were operational.

It is my privilege to be a member of the Mass Task Force and work alongside true professionals.
Respectfully submitted