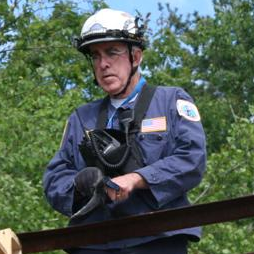 I was the last person on the Task Force to hear about 911. On Saturday September 15th while I was canoeing down Agnes Lake in Quetico Provincial Park in Northwest, Ontario, Canada a canoeist stopped and said “I see that you are from the US. I have some bad news for you”. She only said that Planes had hit the World Trade Center. Quetico is a 1.3 million acre wilderness. She was the first person that we had seen in over a week. Sunday morning on one of the portages I asked the first person who I met what happened to the World Trade Center. She looked at me strangely and said that they had collapsed. Without further information I thought it was like a Tom Clancy novel.

On September 11 about the time that the first plane hit the building I was looking at an ancient Indian pictograph. A pictograph is a rock painting. On September 12 while I was setting up camp I slipped and tore the quadriceps off of my left leg. After lying in my tent for three days trying to figure how we could get back to the US. We set out on a four day journey that consisted of 25 miles of canoeing and four portages or about two miles of walking. I could stand on my leg. However I could not bend it because of the pain. The portages took a lot of time. At the border the flags flying at half mast finally put everything in prospective. Back at the hotel we saw the endless repeats of the day.

It was almost two weeks before I had the quadriceps repaired and about three months on crutches. During that time I had a lot of time thinking that I should have been with the Team in New York. When I hear about picking up body parts I think that I was glad that I did not go.

Not many people can say and know that their friends will risk their life to help you.