This was the first day I had “some spare time”.  I got up and when we got to the pile I took my camera and started to walk clockwise around the pile starting and Church and Dey.  I noticed that the contractor’s crew had be able to remove about half of the big piece of granite in front of our BOO so a grabbed a piece of the shiny black granite and put it in my pocket. 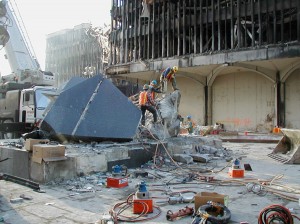 Monument between building 4 and 5 being removed

Our logistics tent was in pretty good shape by now and was well stocked with equipment.  I met up with Gerry Giunta and told him I was going to go out and reconnoiter the site.  Somewhere behind the 10/10 firehouse I found the Riverside Task Force.  They had established their BOO in a hotel lobby about 3 blocks from the pile. They looked pretty comfortable but had no work to do.  Most likely a result of “out of sight out of mind” on the part of the FDNY command staff.  I also ran into the “Suma Ching-Hai Rescue Team.  Appeared to be 6 guys and the equipment you could put in the truck of a Ford Escort.  They did have a 4’ by 12’ banner with their name on it though.  I got to West Street and entered the building located at West and Liberty.  I climbed up the stairs and went out onto the balcony.  This was the balcony that they hung the huge American Flag.  Down below thousands of rescuers looked like ants crawling over a pile of sugar. 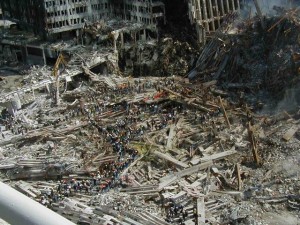 West Street as seen from the 25th floor

I also saw the multiple command posts of the FDNY and NYPD as well as other state and federal agencies that had brought their equipment onto West Street.  The glass roof of the Winter Garden was several stories below and remained somewhat intact although many windows were broken.

I then descended into the lobby and found the BOO of the FDNY US&R rescue team.  I met up with one of the team members.  I forgot his name but I think he said he had returned from the department but put on his uniform and came in to help where he could.  He was acting as the Logistics Manager and related to me stories of managing the equipment. I exited the building and walked through the area that all of the mobile command posts had set up.  I then approached the AT&T building at Barclay and West and was able to see the remains of Building 7 from the west side.  Unlike the other buildings Bldg 7 looked like it had laid over on one side and the north side of the building was somewhat intact.  The AT&T telephone building was standing with several big hole punched in the side of the building.  While most of the telephone switching equipment was intact, I was told that almost all the cables were under water and shorted.  Within 20 minutes I had returned to Church and Vesey, circumnavigating the pile in about 3 hours.